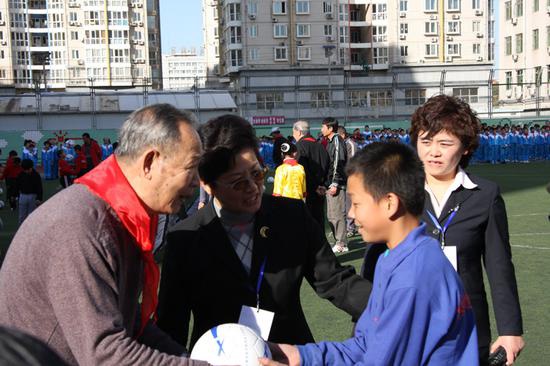 There was a sad news on October 17 that Beijing football star Xie Hongjun passed away at the age of 91.

Xie Hongjun is a native of Zhongshan, Guangdong. He has outstanding skills since childhood and moved to Shanghai. After the founding of the People’s Republic of China, he has participated in the Shanghai Workers’ Football Team, the Shanghai National Team, the East China Team, the Navy Football Team, and the Bayi Team. In 1954, he became the Chinese youth team. One of them studied in Hungary. He fights aggressively, is good at heading and landing tackles, and is unique in shooting from outside the instep. After returning to China in 1955, he stayed in Beijing to work and trained a large number of football talents for Beijing.

Later, in an interview, Mr. Xie still remembered the period when he studied with the Chinese youth team in Hungary in 1954. He said: "We practiced very hard back then. The Hungarian coach gave us a holiday on Sunday and did not let us practice. We stole it ourselves. Because everyone knows how many people can support a person to have the opportunity to study abroad. We must be worthy of the grace of the motherland and the people."

Speaking of Xie Hongjun's training of young players, he has to mention his son, former Guoan "Quick Horse" Xie Feng. Xie Lao's contribution to Beijing football and youth began with his family. The inheritance of excellent sports genes and strict precepts and deeds created the Guoan "Quick Horse".

Recalling the experience of teaching his son, Xie Hongjun once said: "This kid is not easy. I have been coaching him to play since the age of 3. The inside of the foot, the back of the instep, crosses, and shots. If you don’t meet the requirements, you will practice crying. Later, he made great progress, good physical fitness, and fast speed, especially the tacit understanding with Gao Hongbo's partner, which is inseparable from the hard training when he was a child."

On the evening of the 17th, the Hebei China Fortune Club expressed its regret and sorrow for the death of Mr. Xie Hongjun through official channels. The statement read: "All employees, athletes and coaches of Hebei China Fortune Football Club are deeply saddened by Xie Lao's death! Thank you Lao Xie for his contribution to Chinese football. May Xie Lao go well, and hope there is still heaven. With football!"

China Fortune Club also commented, “Xie Lao has devoted his life to the development of Chinese football, dedicated himself to the cause of football, and has been a participant and witness of the development of football since the founding of New China. After retiring, Mr. Xie shed his blood on Chinese football talents. In terms of training, he has personally trained Li Songhai, Wang Junsheng, Jin Zhiyang, Shen Xiangfu, Yang Chaohui, Gao Hongbo and other generations of national brand players and coaches, and they are respected!"

It is understood that Mr. Xie Hongjun passed away in the early morning of the 17th due to illness. The night before, his son Xie Feng was still leading his team in Suzhou to play against the defending champion Guangzhou Evergrande.

In fact, Mr. Xie has been hospitalized for quite some time before. During the first stage of the Chinese Super League, Xie Feng gave up his company and caring for his father due to the arduous task of leading the team. During the lead, he did not want to mention his father's condition too much, because he did not want the team's preparations and games to be affected by this.

Beiqing-Beijing Toutiao reporter learned that it was not until the bad news came from Beijing that Xie Feng asked the club to leave the team temporarily and return to Beijing to prepare for his father's funeral. Since there are fewer flights back to Beijing from Wuxi Shuofang Airport, which is relatively close to Suzhou, Xie Feng had to take a bus to Shanghai, and then take a flight back to Beijing at noon.