Time will always erode the past years, making memories gradually mottled. Those stars who have accompanied us, those legends who have influenced football, use the football under their feet to depict a colorful and colorful world.

Football Hall of Fame, every Tuesday night at 10 o'clock, wonderful presentation. "I am a coach 3.0" will simultaneously launch Hall of Fame player cards for coaches to recruit! 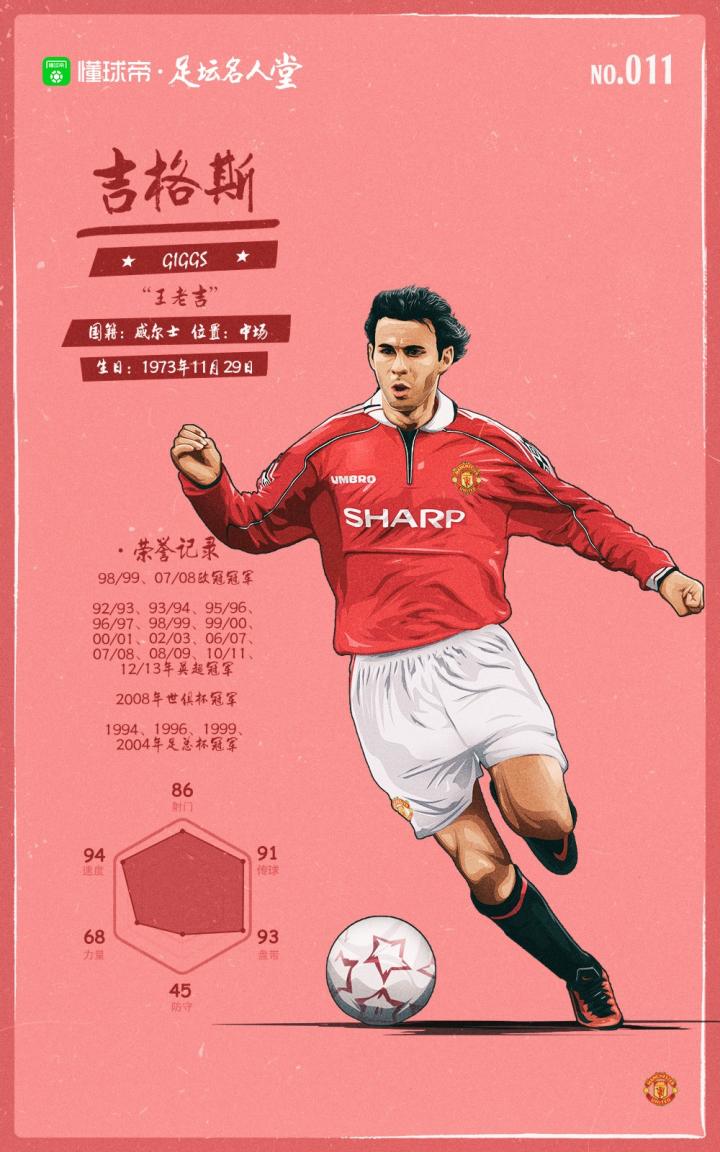 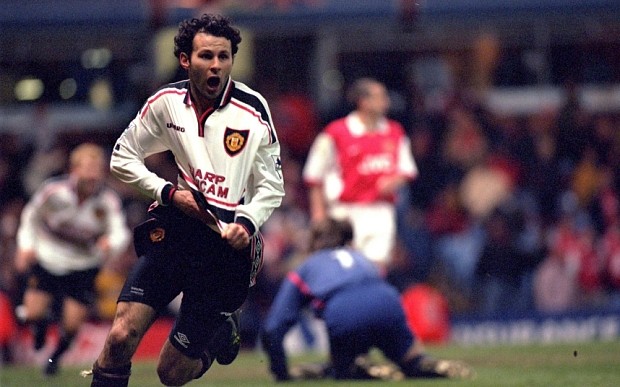 Giggs has shown extraordinary sports talent since he was a child, in addition to football, he also played football when he was a child. After moving to England with his family, Giggs received football training at the local Deans FC, where his coach was a Manchester City scout. Many people know that Ferguson personally recruited Beckham when he was young, but Giggs was the same. On the day of Giggs' 14th birthday, Ferguson personally visited and convinced him to join Manchester United.

Compared with the others in Class 92, Giggs played an earlier first team. On March 2, 1991, the 17-year-old Giggs made his first team debut. He gradually gained more in the following season. Opportunity to play and win the first championship of his career with the team. In the League Cup final, McClair assisted and scored the only goal of the game. After the season, he was elected PFA Rookie of the Year.

At that time, the first candidate for Manchester United on the left-back was Lee Sharp, and it was him who won this honor a year before Giggs was elected the best rookie. Two new stars of similar ages naturally became friends. At that time, Sharp had begun to indulge his private life. Under his influence, Giggs was also tempted by alcohol and women. 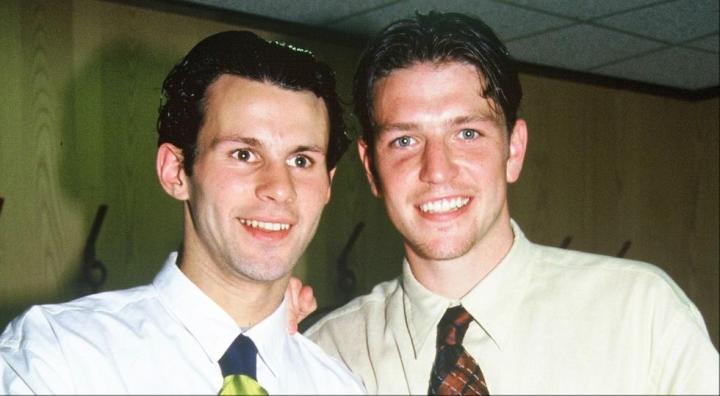 The fate of the two also changed this year. Once Sharp called on Giggs to have a party together, Ferguson got the news and arrested the two on the spot. Regarding this story, the good news British media have many versions of descriptions, but the point is not here. After that, Sharp still went his own way, but Giggs was brought back on track by the roar of the "hair dryer." After Sharp suffered an injury, his indulgent private life destroyed his body and will, and Giggs became the left-wing leader. Since the first year of the Premier League, Manchester United have won 4 of the first five championships. Giggs and the youthful power of Class 92 are indispensable.

In 1998, this season was destined to write the strongest stroke in Manchester United's history. The Premier League, the FA Cup, and the Champions League triple crown, on the road to achieve this unprecedented achievement, Giggs has participated in the most classic moments. In the league, Giggs only scored three goals, but he kept his firepower at the most critical moment.

In the FA Cup semi-final rematch, Manchester United played against old rival Arsenal for the second time in four days. The two teams kept the score of 1-1 until overtime. In the 109th minute, the most exciting and important goal of Giggs's career appeared. At that time, after breaking Vieira's pass, he rushed all the way to tear through the entire back line of Arsenal and kicked the ball into the goal guarded by Seaman. This goal was named the best goal in the FA Cup's 100-year history, and this was the beginning of Manchester United's sprint to three laurels that season.

However, history is sometimes full of magic. This low-quality shot was swept away by Sheringham's witty shot. Solskjaer reversed the score two minutes later. Without Istanbul night, perhaps the most dramatic Champions League final would be It is none other than it.

After entering the 21st century, Giggs's light does not seem to be dazzling before. Manchester United has repeatedly suffered setbacks in the European war, and its dominance in the domestic league has also been threatened by Arsenal. At this time, Giggs encountered another bottleneck in his career. The triple crown team gradually faded out. With the addition of players such as Ruud van Nistelrooy and Fran, and the appearance of rookies such as Ronaldo, Ji Gus's position in the team no longer seems so unshakable. As Giggs struggled with injuries and tried to get back to his state, transfer rumors also gradually grew. Inter Milan's interest in him gradually grew. The media's momentum made Giggs worry about it.

In the football games of those years, Giggs’ growth type was defined as premature aging. Even if you deliberately let him play more games to gain experience and upgrade, his score will drop sharply after 30 years of age. For a wide player, the decline in physical function brought about by age is simply devastating. Coupled with the early debut of a large number of games and accumulated injuries, many people are not optimistic about the future of Giggs.

Suffering from injuries, Giggs chose to seek help from yoga. The facts proved that this decision was very wise. His attendance was gradually guaranteed and he became an important role in the team again. In 2007, Giggs won the ninth Premier League title, which allowed him to surpass Alan Hansen and Phil Neal, two players from his rivals Liverpool, to become the player with the most England top league titles.

After the 2007-08 season, Giggs and Manchester United once again embarked on the top of Europe. In the Champions League final that season, Manchester United and Chelsea fought to a penalty shootout, and Giggs scored a key penalty, dragging the game into sudden death. Van der Sar saved Anelka's penalty kick to help Manchester United win Europe again after nine years. 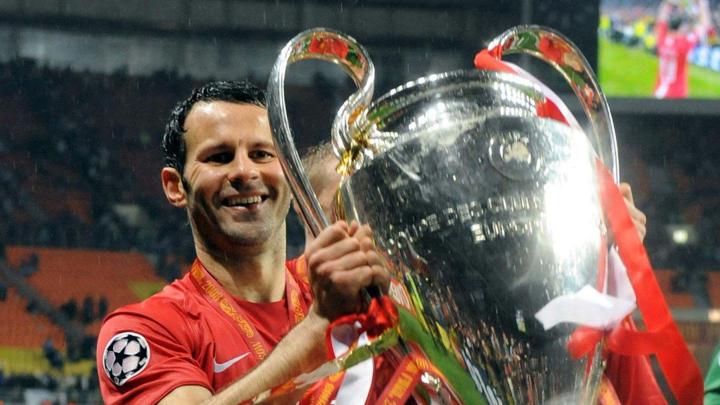 By the end of his career, Giggs appeared more in the mid lane. In fact, there are many examples of wide players transitioning after age, but it is difficult to find another as successful as Giggs. In the 2008-09 Manchester City Derby, the 35-year-old Giggs showed his wonderful passing ability at the end of the game. He assisted Owen in the countdown stage and helped Manchester United win the game that was later named "The best match of the Premier League in 20 years".

Giggs, who switched to midfield, showed outstanding overall outlook and rhythm control ability. Although his and Scholes' combination of "two elders" is not as athletic as before, but has more sophisticated experience. What's even more surprising is that Giggs can always complete exquisite excellence on the court, and the instantaneous burst speed makes people think of that young man on the flank. Facing an opponent who was twenty years younger than him, Giggs used his actions to show what Jiang is still hot.

Having maintained an underground relationship with his younger brother's wife for many years, this made the halo on Giggs instantly shattered, and the title of the title was naturally no longer possible. That was probably the hardest time for Giggs, football has become all his sustenance. If there is no sister-in-law, Giggs' image may be perfect. 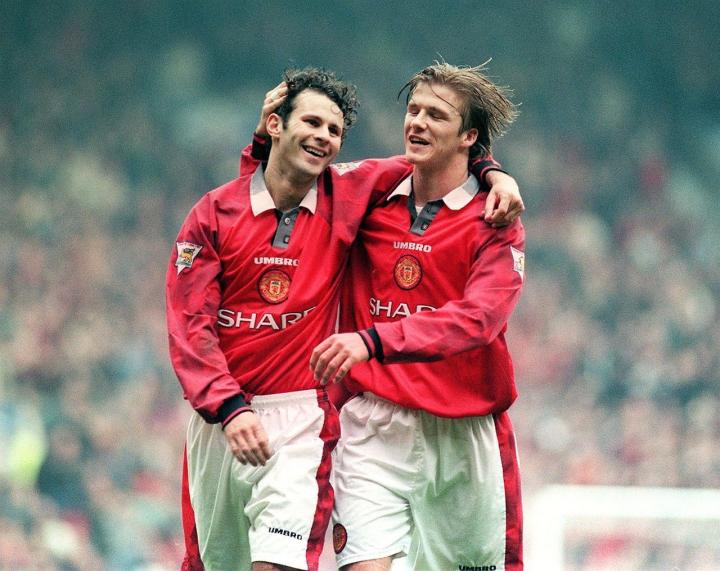 Everyone knows that Beckham has unlimited charm, but in the 90s Giggs was more popular than Beckham. There are even rumors that in a game in 1994, a female spectator rushed into the field while Giggs took a corner kick. Give him a kiss (difficult to verify the authenticity). In the 24 seasons with Manchester United, Giggs has never received a red card.

The 41-year-old can also make 22 appearances in various competitions in a single season, which is the best evidence of Giggs' self-discipline and professionalism. There is an anecdote: When Ronaldo played for Manchester United, one day he took a Coke and prepared for breakfast. When it was too late, Giggs pushed Ronaldo to the wall and warned him: "Don't do this again!" 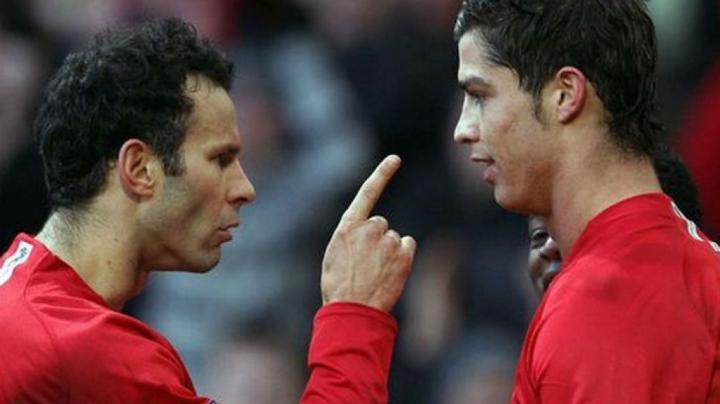 Perhaps it was Giggs' precepts and deeds that influenced Ronaldo, and the Portuguese still maintained an excellent competitive state at the age of 35. In addition to diet, yoga is also Giggs’s best friend. In Manchester United, many people learn yoga because of Giggs’s example, hoping to improve their physical condition through it.

"What, the coach is warming up?" I don't know if the inspiration for the movie comes from Giggs, but this scene did appear in the Premier League. After Moyes dismissed get out of class, Giggs took over the coach, and his farewell battle was to put himself on the court. One person, one team, Giggs guarded the left wing of the Red Devils until the age of no doubt, and after hanging up his boots, he naturally became a member of the coaching team. 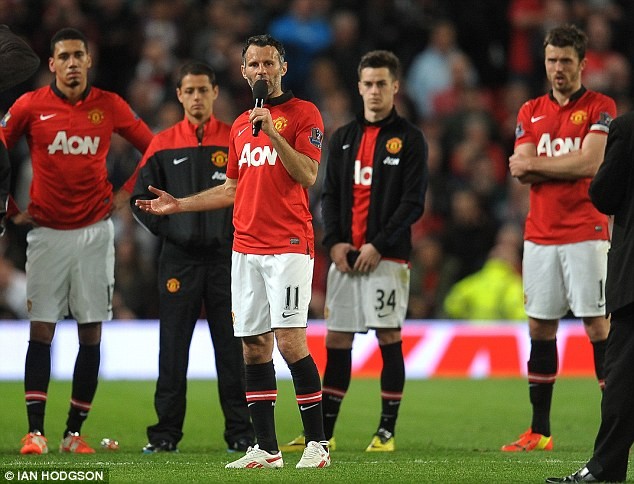 After accumulating several years of experience as an assistant coach, Giggs became the coach of the Wales team in 2018. As a player, he failed to lead Wales to complete a breakthrough. Due to his overall strength, a few stars such as Giggs and Bellamy also failed to lead Wales to achieve good results in the international arena. Now, he has the opportunity to lead Bell, Ramsey, James out.

The successful transformation of Giggs in the midfield position is enough to explain his golf quotient. Giggs once said, "As you get older, everything in front of you will gradually slow down." Well, it seems that masters see the world the same.

When he was young, Giggs proved that he is not only relying on speed to eat, his cadence and fake moves are first-rate. The long-distance attack against Arsenal is the best example. He can shake without touching the ball. To open the defense, you can also use continuous dial changes to make the defender trying to close the goal empty. In the latter part of his career, Giggs's ability to dribble is even more perfect. Even if his speed and physical fitness decline, his excellent sense of the ball and rhythm make it almost impossible for opponents to grab the ball at his feet.

As he grows older, Giggs’ skills become more mature and comprehensive. Taking free kicks as an example, Giggs’ free throws are very characteristic. The speed and fall of the ball always make it difficult for opponents to save, but his brilliance is lost by the same team Beckham , Ronaldo and others cover up. In the latter part of his career, Giggs returned to the center position and his ability to pass threatening balls became more evident. In the 2009-10 season, the 36-year-old Giggs also set a new high of personal league assists in a single season-12 times. In the Premier League's history of assists, Giggs led by 162 times, second place Fabregas has only 111, and David Silva, who is still in the Premier League, has 90 assists. It can be predicted that this record will be difficult for anyone to break in the coming years. The record of 22 seasons in the Premier League, goals scored in 21 consecutive Premier League seasons, and 13 Premier League titles is probably even more difficult for future generations to match.

Reminiscing about the legend, now we have one more opportunity: Jiggs has been added to the game "I am a coach 3.0", waiting for you to experience it.

For more exciting activities, please pay attention to "I am a coach 3.0 circle" 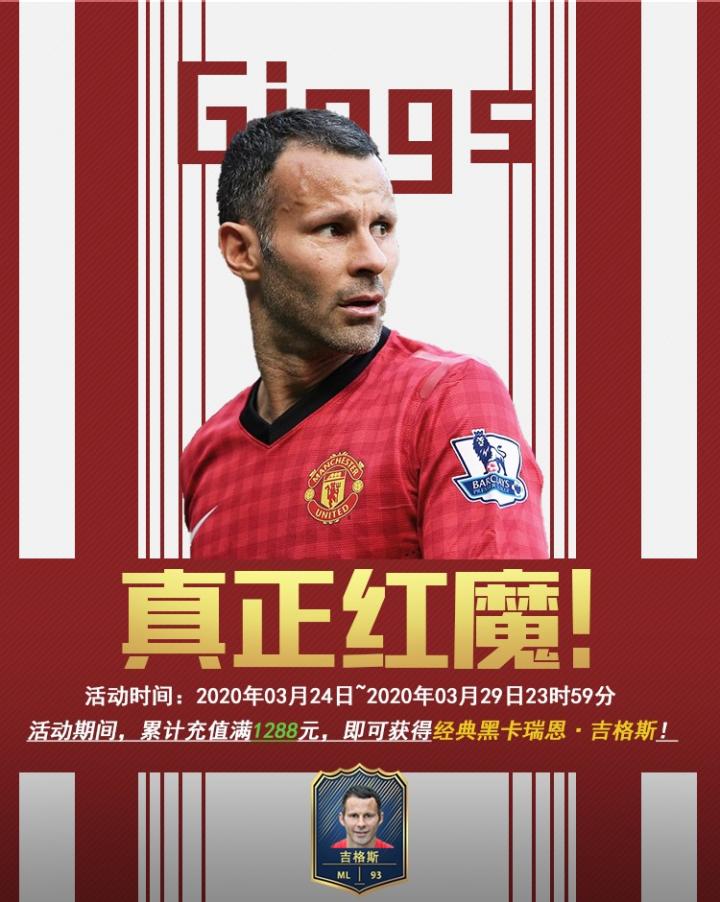